One of the most important cooler comparisons is “Orca Coolers vs Yeti Coolers.”

These two coolers are neck in neck. But why is it such a serious standoff? The following is an easy-to-read comparison that leaves no stone uncovered.

You’re going to find it all here, with none of the good stuff left off. After all, you don’t have all day to waste time reading a cooler comparison that only answers some of your questions. You’ll find detailed info about the 12 most most important things to know before spending your hard earned cash. 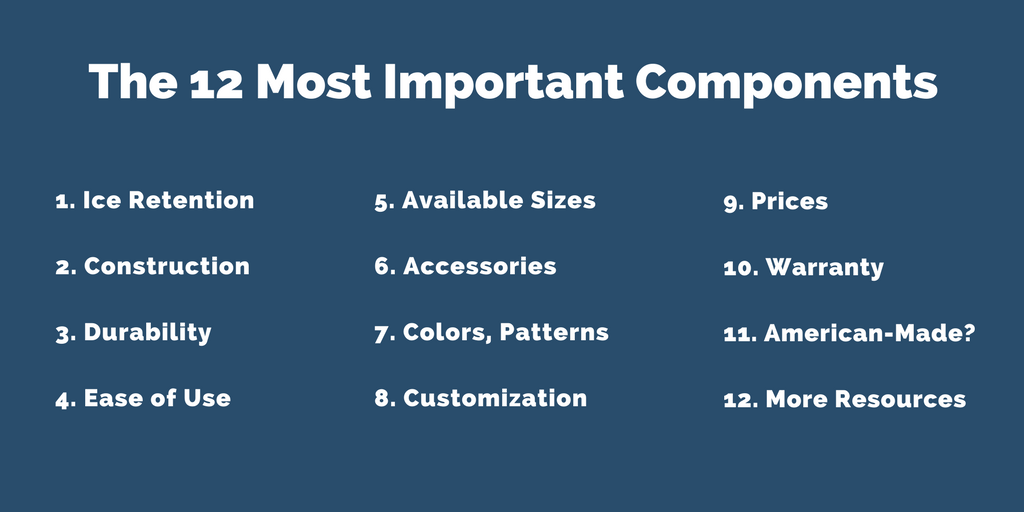 Orca Coolers vs Yeti Coolers Capacity: How Yeti Blows Orca Out of the Water

Yeti Coolers come out on top in this category of the Orca Coolers vs Yeti Coolers rivalry.

Notably, Yeti Coolers’ numbers don’t represent capacity. For example, a Yeti Tundra 105 is only capable of holding about 87.2 quarts.

If you have a specific size you want to compare, each of these offers customized Orca vs Yeti Cooler Size Comparisons for a more specific comparison.

This may be due to Orca Coolers’ extra inch of insulation in their lid. Yeti offers a two-inch lid, while Orca is constructed with a three-inch lid.

According to many, Orca’s last an average of 3-5 days longer.

Both of these rugged molded coolers have fantastic construction. But how do they compare? First, we’ll look at Yeti’s construction.
Go Back To Overview


Orca Coolers vs Yeti Coolers: 3 Differences in Construction to Be Aware Of

As you can see, both of these mighty beasts are constructed in similar ways, with just a few slight differences. The differences include:

Orca Coolers vs Yeti Coolers: Is One More Durable than the Other?

Unsurprisingly, both of these beastly ice chests are durable and able to take a beating or ten.

The plastic that makes up their body and lid is the strongest kind. In fact, it’s so strong kayaks are crafted from the same material. The riveted pin system keeps their hinges right where they belong.


Orca Coolers vs Yeti Coolers: Why They Both Have the Same Level of Usability

There are several similarities in how these coolers are user-friendly…and how they aren’t. First, here are the similarities:

Now for the differences:

The pros and cons of each brand of ice chest weigh each other out. Therefore, it makes the most sense to call it a tie.
Go Back to Overview

Yeti’s accessory collection is as wide and varied as Orca Cooler accessories. Handy cutting-board dividers, fishing rod holders, and beverage holders come with many of their coolers.

And that’s just mentioning a few of the basics. There are plenty of others – just a couple of examples are the wall mounted bottle opener and drain plug hose connection.

Although each of these high end cooler brands offer fantastic accessories, Orca blows Yeti out of the water with their molle wrap system.

3 Color Options for Keeping Your Yeti Simple Yet Classy

If you like basic, you’ll likely be pleased with Yeti’s 3 main colors for their roto molded ice chests. When Yeti first came onto the market, White and Desert Tan were the only options. In 2013, Yeti introduced their color called ‘Ice Blue,’ adding at least a little color to their drab selection.
Go Back to Overview


Love bright colors? Orca Coolers Are for You

Similarly, Orca offers standard basics like White and Tan. However, these roto molded masterpieces also offer brighter colors like solid Pink and Green. If you want to branch out from the norm, you can find colors like Orange, and Pink right here.

In addition to all of the fabulous colors available, Orca makes camouflage ice chests.

“YETI custom logos are durable, permanent graphics that do not peel or fade once bonded to the cooler. YETI’s proven logo application process ensures the logo will last the life of the cooler.”

Yeti’s Collegiate Series gives so many people the opportunity to represent their alma mater in style. Check to see if your university’s logo is available; there are 38 college logos to choose from. Of course many of the logos are colorful, sprucing up otherwise boring (in our opinion) colors.

How You Can Make Your Yeti Rambler Cup Even Better

Visit Yeti’s Custom Cooler Shop to have your logo added to your Yeti Rambler. Show off your business’ logo or any type of sweet design you came up with.

Yeti also offers a giant selection of pre-made logos. For example, in one subcategory alone, fishing, there are 17 logos available.

Orca also has a collegiate series of coolers and drinkware. Although it isn’t quite as big as Yeti’s collection, their colorful coolers and tumblers are the most cheerful accessories one could ask for.

Prices are also quite similar between the two brands, with Orca Coolers being an average of about ten to twenty bucks cheaper than Yeti Ice Chests. In our books, that isn’t enough to say Orca has any sort of advantage over the Yeti.

Go Back to Overview

The warranties couldn’t be more different than the sizes and prices are similar. The Yeti Coolers’ five-year warranty gives us some degree of confidence in the Yeti brand’s workmanship. But five years seem pretty measly next to Orca Coolers’ lifetime warranty.

Orca Coolers vs Yeti Coolers: Where They’re Really Made May Surprise You

Where are Yeti Coolers made?

Additionally, their Yeti Hoppers and Ramblers are manufactured in China. Yeti doesn’t say how much they manufacture in the US, but we’re willing to place a huge bet that it isn’t here in America.

Are Orca Coolers really 100% American Made?

Another question we often hear is asking which ice chests are American-made. Unfortunately, there aren’t many coolers that are both manufactured and assembled in the US. *But* Orca brand ice chests are one of the few verified American ice chests.

And the Verdict Is…

If we had to choose the best cooler, it would be the Orca brand cooler. The reasons for this are simple:

All this being said, Orca Coolers are only available in sizes up to 140 quarts. Yeti extends all the way to 350. In that area, Yeti Coolers are winning by a landslide.

Both ice chests are pretty damn dependable. They’re built well, are similar in most categories, and even look alike. Of course, different people will be happier with different brands. It all depends on your preferences for factors like ice retention, customization, etc.
Go Back to Overview

The Complete Review of Orca Coolers for Sale

Charts of the various Yeti Tundra models, videos, and reviews of each Yeti Tundra size, you’ll find the nitty gritty specifics on the Tundras from the small Yeti Roadie all the way up to the Yeti Tundra 350.

If you didn’t find enough about the Yeti Roadie in this review, have no fear. The Yeti Roadie 20 Quart Review is truly in-depth. (It actually puts this cooler comparison to shame, as a matter of fact.)

*Our Tent Buying Guide talks about a lot of the same terms used for coolers, like ‘polyurethane’ and ‘denier.’

Go Back To Overview