The 2 Best Drink Games Without Cards:

Ever heard of the song “40 oz to Freedom” by Sublime? Well, Edward 40 Hands the Drinking Game and Edward Scissorhands Movie Drinking Game doubles that to 80 oz.

Both of these are great 2 player drinking games, but they’re also great as drinking games for parties. Ready to rumble? Here’s an overview to help you find what you’re looking for.

By and large, this is one of the best easy drinking games we’ve come across. You don’t have to think about cards, rush for spoons, or keep track of a long list of house rules.

Sidebar: the two other names for Edward 40 Hands Drinking Game are Edward Ciderhands or Amy Winehands. We’ve even heard of Edward Watermelon Hands. Basically, whatever you tape to your hands! 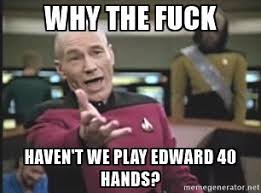 If you’re a beer lover, you’ll be in drink game heaven.

Beer is the required drink, and you get to choose whatever kind you want.

What are the rules of Edward 40 Hands drinking game?

You’re not allowed to take off the hands mid-game, for any reason. In other words, you can’t check your phone or go to the bathroom until you’ve finished both bottles.

At the bottom of this post, there’s the best collection of Edward 40 Hands Drinking Game videos. Make a playlist of them and turn it on right before you all have your 40 hands on. Because it just makes the drinks game even more hilarious!

This name isn’t as catchy as Edward 40 Hands, but it’s perfect if you want to drink less. Obviously, it’s the exact same game only with smaller bottles.

In this variation, put on your 40 hands. All of the same rules apply, but you also have to follow the “Edward Scissorhands Movie Drinking Game” Rules.  This variation is deadly!

You’ll love these competitive drinking games with no cards:
How To Play FUBAR Drinking Game With Rules
How to Play Waterfall the Drinking Game

On top of being easy, you only need two things:

Whenever these things happen, you have to take a drink:

How to Play Edward 40 Hands
CALL ME BEERCULES! (Hilarious what happens AFTER drinking 80 oz of beer!)

As always, drink responsibly. If you start to feel like you’re about to surpass your limits, duck out of the game and just enjoy the antics of the other players. You’ll have lots of hilarious stories to tease them about the next day. Or who knows…maybe you can secretly get some footage and upload your own video to YouTube. Let the games begin!