Cheers to Another Weekend!

Knowing how Beer Pong House Rules work is the beginning of something awesome… By the end of our beer pong boot camp, you’ll be a pro! Even if you suck, at the very least, you’ll be drunk and happy. 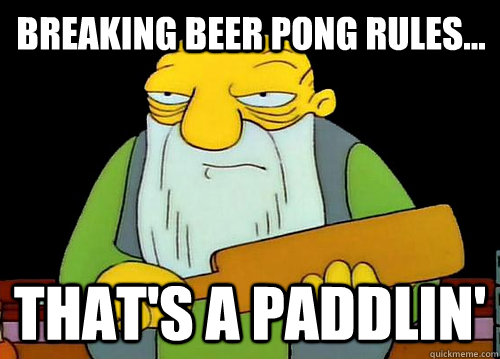 First, the Basics:
The 4 Essential ingredients to a Successful Beer Pong Game

The right Beer Pong Equipment and Set Up is just as important as understanding House Rules. Here are 4 of my favorite bargain beer pong sets:

If you’re hosting, it’ll definitely up your game to have a few beer pong essentials. There are plenty of bargain beer pong sets and equipment available, so you don’t have to spend an arm and a leg to get the supplies you need.

While rare, and this video is probably a joke, it’s a good example of why you need to know house rules before starting a game at anyone’s place.


Beer Pong House Rules is Number #1 on our list of official beer pong rules because it’s by far the most important rule. There are hundreds of beer pong rule variations. But if there’s any question about which variation is in affect, the host has the final say.

Hosts of the weekend bash are the ones who create and manage the beer pong rules, or “house rules.” Every dorm room, house, bar, tailgate partywill have its own unique set of rules—and those rules are law.

If you’re hosting the next beer pong night, make sure to display your Beer Pong House Rules on a poster or sign. Having these guidelines displayed makes it easier for everyone. In my opinion, it’s easier to just use a dry erase board with markers.

First of all, you’re awesome. Whether you’re hosting in the basement of a fraternity house or in an apartment, you rock. Hosts get stuck cleaning up the next morning, so use use beer pong house rules to your advantage. So you deserve this authority! 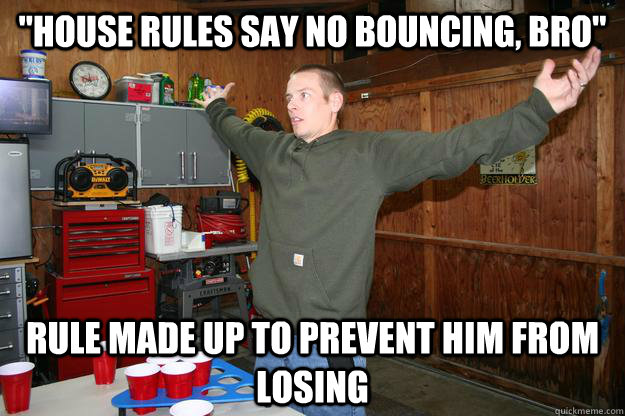 First, master the basics. Another key point is to play with confidence. Feel like you have embarrassingly bad hand eye coordination? No problem.

If you’re really brand new, make sure to watch the 3 Beer Pong Tips and Strategies Videos at the end of this post.

Make sure you know the Beer Pong House Rules before you start playing. If you might have to run around the block naked, you might want to be aware of this in advance.

Make sure you know what you’re getting into!

Here’s where you should go from here! (Video Below)

Why do we love beer pong so much? Well, you’re getting drunk and throwing balls around. Obviously, that’s the number one reason. But the next best reason is that you get better the drunker you get! So, get out of your head a little by doing a couple shots or playing a round of Most Likely.

After that, the shots you’ve practiced, it’ll will be a cinch to land when under pressure. If you’re really brand new, make sure to watch the 3 videos at the end of this post.

Dress to Impress! Whether you want to go sexy, cute, hilarious, or weird, go with whatever makes you feel best. Who knows? You just might leave the party with the guy/girl you’ve been crushing on for the past 3 months.

Sometimes getting too competitive ruins the fun. Remember, the number one reason is to have fun! Even if you troll, you still spent time being fucking awesome.

As cliche as it is to say, practice really does make perfect. So watch all the videos you can (we have even more for you coming up!), and get your trick shots down pat.

Beer Pong House Rules
Videos to Up Your Game

How to Not Suck at Beer Pong

How to Play Beer Pong Video