In the time it takes to flip a dime, you can’t make a shot, your team’s struggling, and your pride hurts. Your teammate is becoming awfully nervous at the thought of soon trolling. Or worse, holding hands and doing the dreaded naked lap.  At this point, the “Beer Pong Celebrity Shot Rule” might be the only thing that can save your friendship and the game on a rough night at the beer pong table.

We’ve all been there. It’s the middle of a beer pong match, and your touch has gone cold. But don’t worry. Because once you master the Beer Pong Celebrity Shot Rule, you’re going to be a step closer to making comebacks when you’re just having an “off” night.

Quality beer pong sets are so important. Go big or go home, am I right?

The following are five of the most important pieces of Beer Pong Equipment:

Why It’s Important to Have Great Equipment

For one thing, it’s fun!  And there are plenty of  bargain beer pong sets with good value, so it doesn’t cost much.

Sweet beer pong tables, cups, and balls work together to give you the organization and confidence you need to win.

Because if you’re asking to use the Beer Pong Celebrity Shot Rule, you need all the help you can get!

What Is A Celebrity Shot In Beer Pong? 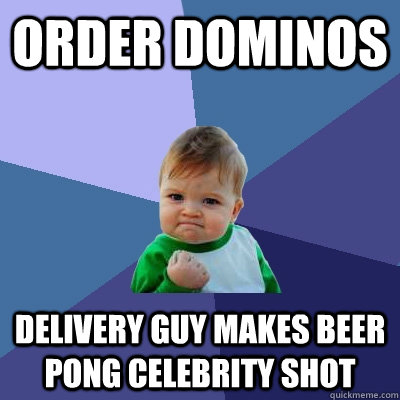 The Beer Pong Celebrity Shot Rule allows you to choose a member from the audience, as long as they’re cheering you on. It can be the friend shouting advice.

Or better yet, the attention seeking hero in the crowd who’s seen you failing so hard all night. Anyone.

When a crowd has gathered, the pressure’s on. They’re just waiting for you to Troll.

The pressure kills me! The Beer Pong Celebrity Show Rule allows you to temporarily escape the building pressure. Thank god.

With the Celebrity Shot Beer Pong Rule, you can take the attention off yourself for just a moment.

And hopefully, the “celeb” will be successful and get you out of the hole.

What do the official beer pong rules say about who the “celeb” can be?

Well, official beer pong rules state that you can pick anyone in the crowd. It could be your friend or the attention seeking hero, as discussed above.

I’ve seen some clutch celeb shots. Here are the top 5:

#1. At a tailgate party once, someone had their rockstar grandma do a celebrity shot.

#2. The campus cop who came to bust a frat’s beer pong party.

#3. A chick on crutches totally crushed it, even though she just broke her leg two days ago. (Goddess.)

#4. One of the best times was when a couple that’d just broken up had a moment of peace.

The guy was playing, and he knew his ex was amazing at beer pong. So he chose her.

When she nailed that celebrity shot, they had a really cute moment and were together the rest of the night.

Important Note: You and your teammate can only pick one Beer Pong Celebrity to come into play once per game.

Second, keep in mind that it’s just as though you were shooting. A missed shot still counts as a miss.

However, there are no bonus cups awarded for a shot made by a celebrity.

In the rare circumstance that no one in the crowd requests a chance at the “Celeb” shot, you still have options.

Simply call out “CELEBRITY SHOT!” Prepare for a frenzy acting of drunkards with the manners of first-grade school kids. “Pick me!” “Pick me!”

#1. Here’s one tip for when you call Celebrity Shot Beer Pong: Choose wisely, as this shot is only allowed once per game, per team. Either you’ll end up one step closer to winning or your “Celebrity” will sign your beer pong death note. You love your best friend…but he sucks at beer pong? That’s a tough call to make.

#2. Whoever you pick, let them put their skills where their mouth is and take your next shot. Simply stated, the “Celeb” shot is when a person not involved in the current beer pong game shoots for someone playing the game.

#3. Make sure to have your house rules posted. Or if you’re on someone else’s turf, make sure you know there house rules!

#4. Liquid courage, my friends. If you’re losing, hopefully you’re tipsy enough to relax. If not, do a shot to calm your nerves. You got this!

What’s your all time best celeb shot? Somehow get it up on social media with the hashtags #chuggie and #celebshot, and we’ll send you a 99% discount code for anyone one thing you want from the Chuggie Store. (Tip: go for a 4-pack.)

Or take advantage of some bonus material:

How To Be a Kickass Host

Beer Pong Set Up for Newbies